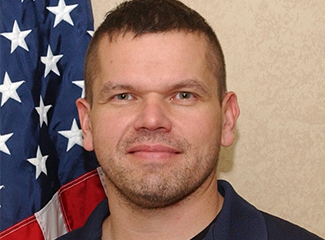 Bill, a native of New Brighton, PA, holds a Bachelors Degree in Management Information Systems from Robert Morris University, Masters in Military Arts and Sciences from the Command and General Staff College at Fort Leavenworth, Kansas and the American Military University. After graduating from New Brighton High School he enlisted in the U.S. Army Reserves eventually transferring to the PA National Guard in 1998 to attend Officer Candidate School where he received his commission in 1999. He currently serves as a plans officer at the 28th Infantry Division Headquarters in Harrisburg, PA.

Currently holding the rank of Major, Bill has been serving since 1987 having deployed with the PA Army National Guard for both Operations Enduring and Iraqi Freedom.