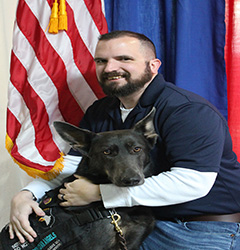 US Army Veteran | Board Member

Ben Keen joined the board of Operation Troop Appreciation in 2019 after working with them for some time.  Ben served in the U.S. Army from 1999 – 2008 as a communications expert.  His assignments include Germany, Ft. Campbell, Korea, and Arizona.  Ben completed several combat deployments include being a member of the 1st Bridge Combat Team of the historic 101st Airborne Division (Air Assult) in 2003 during the initial invasion into Iraq.

Upon his discharge in 2008, Ben moved to Pittsburgh and started to work in the private sector within the Information Technology field.  In 2017, Ben joined the team at American Eagle Outfitters where he currently works as a Senior Systems Administrator.  He currently resides in South Park, PA with his wife, 3 cats, and his service dog Bolt.

Outside of his military awards, Ben has been named the 2016 American Staffing Association National Employee of the Year for his efforts in helping transitioning Veterans find meaningful employment and has been featured in both local and national news media discussing situations that Veterans find themselves in during and after their transition to the private sector.